APOLOGIES: for my lack of posting. I’ve had multiple technology issues.

Here is a post that I’ve transferred from my facebook Notes and is the result of several years of chewing on this bone: 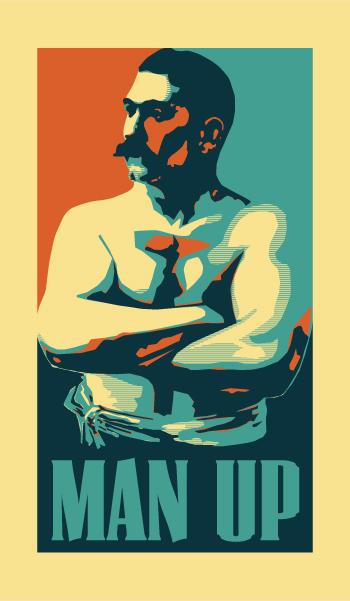 I still don’t understand the current catch-cry by Christians to ‘man-up’ when manning-up doesn’t necessarily lead to justification by faith in Christ alone. If the ‘man’ you’re supposed to ‘up’ into is one that is justified by Jesus, he has to realize that becoming a ‘man’ (of God, if you want to use the tag) is not, afterall, the final goal. I am afraid that those who think they are already a ‘man’ might think themselves morally superior to those that aren’t, and those that aspire to become a ‘man’ might envy those that think they are. Really, the man has to shed himself of his manliness (and his reliance on his manliness) to realise that Jesus has become the man God wants him to be. Jesus died on the cross carrying the man’s failures by God’s judgement on him. God’s verdict for Jesus is then given to the man who has faith in him. And the man turns from being a ‘man’ into a child of God, his Father.

EPILOGUE: A humble identity “in Christ” (see Ephesians 1) gives us the freedom to take responsibility for its own sake as a “good work” (cf. Ephesians 2.10). That includes, especially, taking the responsibility to bring up your family with the knowledge and the joy in the Gospel.

EDIT: Responsibility only becomes a freedom in Christ because

Thus responsibility, despite what frustrations may come before the return on Jesus, is actually eternally worthwhile and is enjoyable only because of the man who was most responsible: Jesus.